At their weekend getaway in upstate New York, dealer Bernd Goeckler and designer Carl D’Aquino mix wide-ranging styles with the greatest of ease

The proliferation of midcentury masterworks in Bernd Goeckler’s New York City shop testifies to the German-born antiquaire’s romance with classic modernism. Among the objects of his affection are André Sornay desks studded with nailheads, Paolo Buffa chairs with walnut frames as sinuous as streams of molasses, and Axel Salto ceramic vessels knobbed like hand grenades. But when it comes to houses, the dealer is smitten with design of considerably older vintage.
Living in Basel, Switzerland, in the 1970s and ’80s, Goeckler occupied a couple of 17th-century townhouses. Weekends were spent at a Renaissance-era château in the Franche-Comté region along the French-Swiss border, an area aptly described as “the Hamptons of Switzerland” by Goeckler’s life partner, Carl D’Aquino, a principal in the Manhattan design firm D’Aquino Monaco. Several years ago the two men began searching for a Stateside property that would be a respite from the hurly-burly of New York City, a place where they could tempt weekend guests with homemade goulash and foie-gras terrine—and Goeckler’s imagination drifted to centuries past.

“Bernd wanted a Colonial house, something that spoke of America’s roots,” says D’Aquino, noting his own preference for more modern settings, such as the couple’s luminous Greenwich Village loft (Architectural Digest, April 2011).

“After much discussion and investigation, I acquiesced. I realized that age and style mattered less than simply finding a beautiful place for us to enjoy.”

Fitting the bill was an Arcadian 20-acre spread in New York’s Hudson River Valley, with well-wooded grounds that have been enhanced by an opulent boxwood parterre foaming with white hydrangeas and a Monticello-style kitchen garden where tomatoes and zucchini flourish in raised beds. The circa-1750 redbrick house, set on a hilltop, looks as if it were plucked out of a folk-art painting—so much so that one half expects to see a milkmaid strolling to the barn out back.

The pre-Revolutionary ambience dissipates, however, once the pollen-yellow front door swings open to reveal an unlikely miscellany: A 19th-century Austrian beaded chandelier shaped like a clump of mistletoe (it is one of several in the house) dangles in the entrance hall, near a brawny 1951 Edoardo Alfieri terra-cotta relief that once graced an Italian ocean liner and a cheerful Régence commode painted the color of a ripe mango.
“I didn’t want typical historic American interiors,” says D’Aquino, who collaborated with his professional partner, architect Francine Monaco, to renovate the structure.
Monaco had visited the former gentleman’s farm for the first time shortly before her friends purchased it. “Though the house wasn’t in great shape, it was perfect,” she remembers. “It had a majesty about it that really fit Bernd.” Its drawbacks were quickly righted: Crumbling bricks were replaced, and Monaco re-created missing crown moldings from surviving architectural details. State-of-the-art mechanical systems, among them geothermal heating and cooling, were installed. Topping it all off is a spacious new eat-in kitchen splashed with green Moroccan tile, in the rear wing of the L-shaped structure.
The finished interiors are positively exhilarating. A prime example is the living room, where the couple daringly planted a circa-1970 Angelo Mangiarotti pedestal table at the center of the room and then ringed it with Swedish neoclassical chairs. That surprising betrothal of styles opened the mix-master floodgates. In came fringed ’30s-meets-Victorian canapés once owned by the design diva Madeleine Castaing, Art Moderne chauffeuses perched on corkscrew legs and upholstered in saffron velvet, bronze sconces by Belle Epoque grandee François Linke, and antique scenic wallpaper that depicts the Montgolfier brothers’ 1783 hot-air balloon trial. The Gustavian sofa that stretches along one wall of the space dates from the 18th century—at least partly. “When I bought it in Stockholm, it was almost a foot narrower,” Goeckler reveals. “But I know a wonderful wood-carver and had him make deeper sides so you can really take a nap on it.” 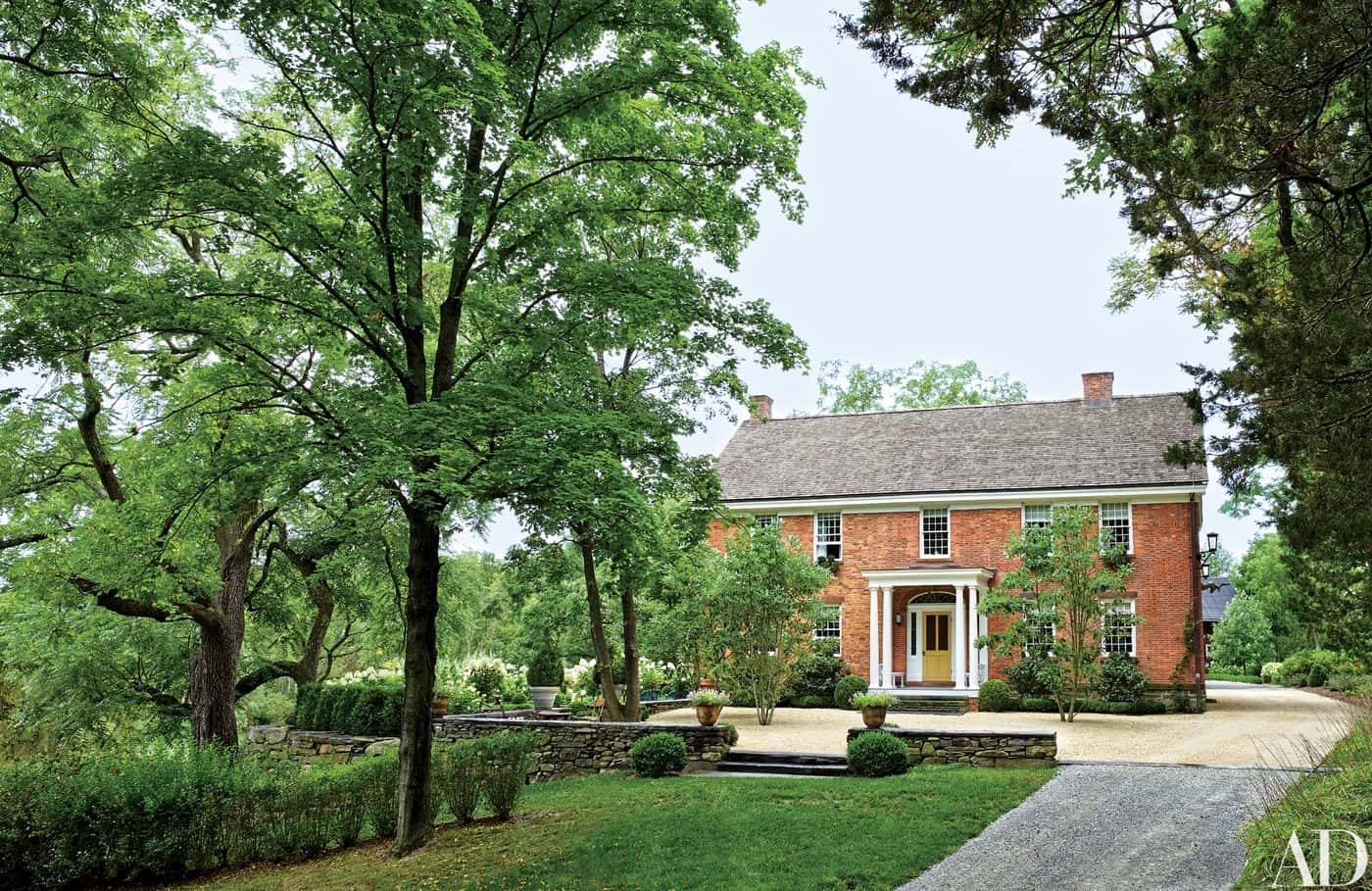 A Benjamin Moore gold brightens the front door of the circa-1750 house. 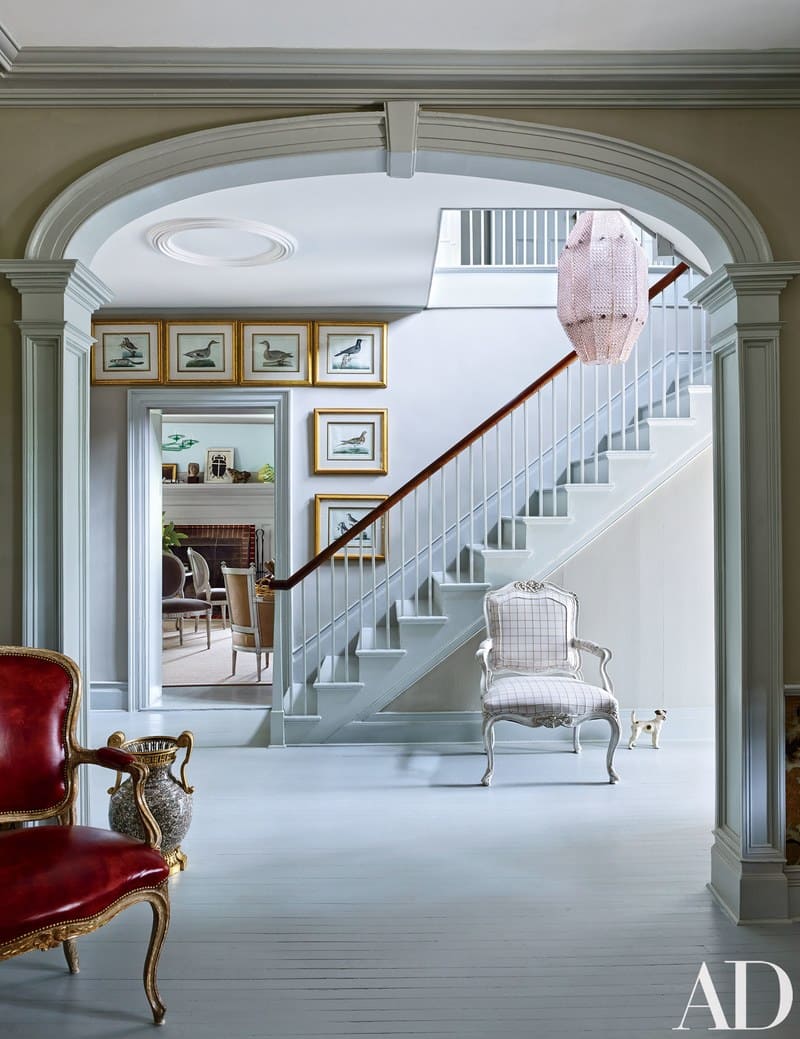 The elegant stair hall is crowned by a Venini pendant of amethyst glass; 18th-century engravings by Johann Gmelin frame the doorway.

The living room decor is centered on a circa-1930 Italian green-glass chandelier and an Angelo Mangiarotti marble pedestal table encircled by 18th-century Swedish side chairs; at far left, a Gustavian sofa upholstered in a Colefax and Fowler linen-cotton is paired with 19th-century scenic wallpaper panels by the Velay Manufactory. 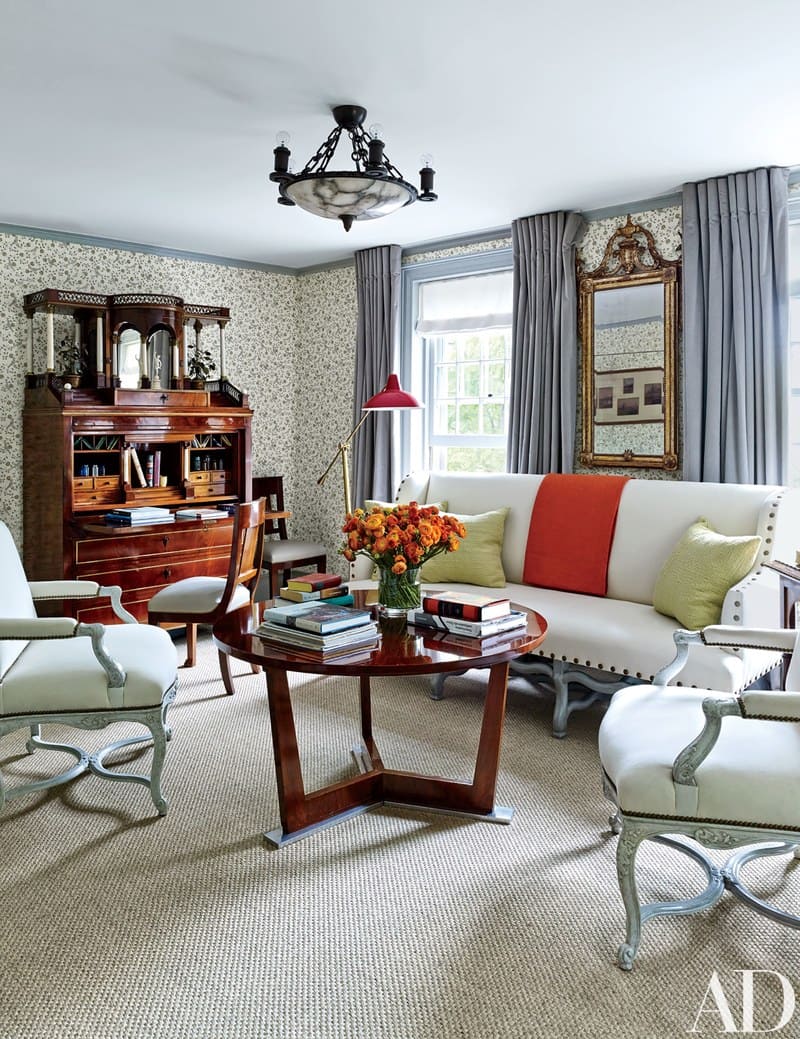 The master sitting room brings together a German neoclassical drop-front secretary, a 1950s Arredoluce brass floor lamp, and a French Art Moderne cocktail table; the curtains are of a Schumacher velvet, the sofa’s throw pillows are covered in a Vervain cotton, and the sisal is by Stark. 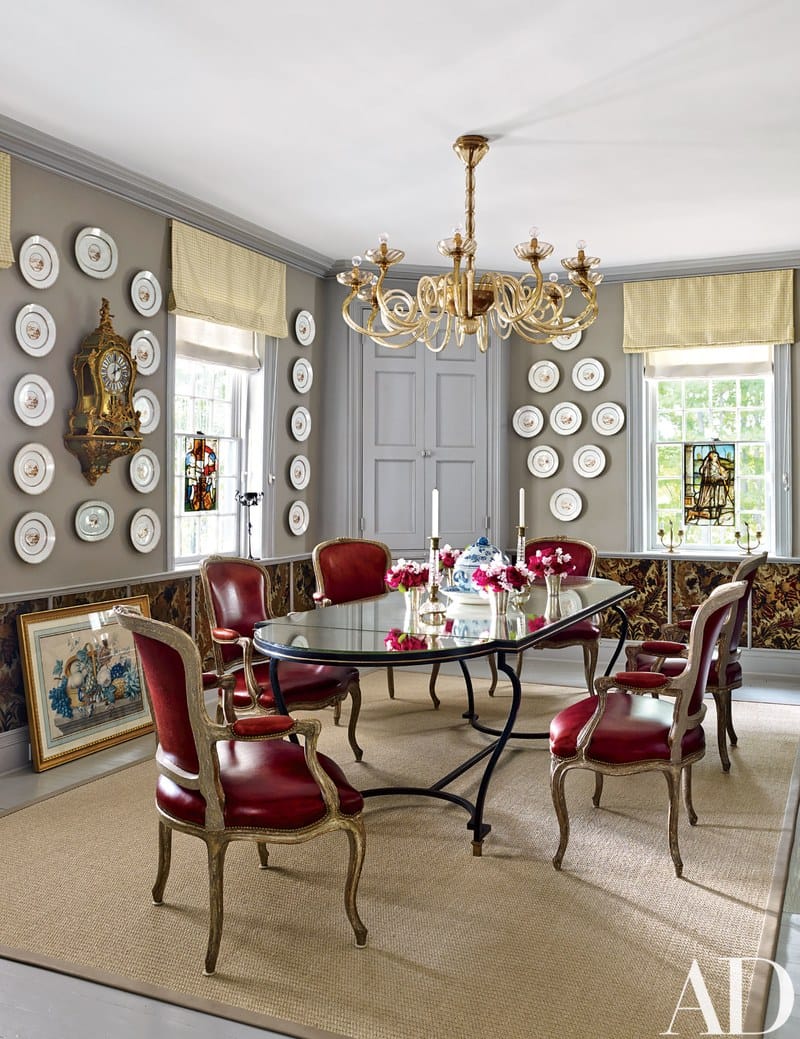 In the dining room, a Venini chandelier hangs above a vintage French table surrounded by Louis XV fauteuils; 18th-century Chinese export porcelain plates dapple the walls, above dadoes of hand-painted embossed leather that once belonged to Rudolf Nureyev.

Belting the red-and-gray dining room is a patchwork wainscot made of hand-painted embossed leather scraps from one of decorator and set designer Emilio Carcano’s grand-ducal schemes for ballet star Rudolf Nureyev. “Bernd kept presenting things to me and saying, ‘How can you make this work?’” Monaco recalls with a laugh. Perhaps the most unexpected relics are nested in the library: oak built-ins from an Art Nouveau room, including seating and bookshelves created by artists Paul Jouve and Eugène Grasset inset with golden plaques by ceramist Alexandre Bigot. The moody cabinetry’s intersection with its Colonial surroundings feels a bit like Sarah Bernhardt, siren of the Seine, seducing Thomas Jefferson.
While the decor might be too eclectic for timid folks, “it fits together in a timeless way,” D’Aquino says. “Scale is the essence of design. If the living room chandelier were any smaller, for instance, it wouldn’t work.” Goeckler seconds the notion, adding that the playful ensembles of furnishings so widely varied in period and style lend the house an open, welcoming attitude: “Sometimes I walk into the living room and wonder, Oh, are we having a party?”

About the Author: admin